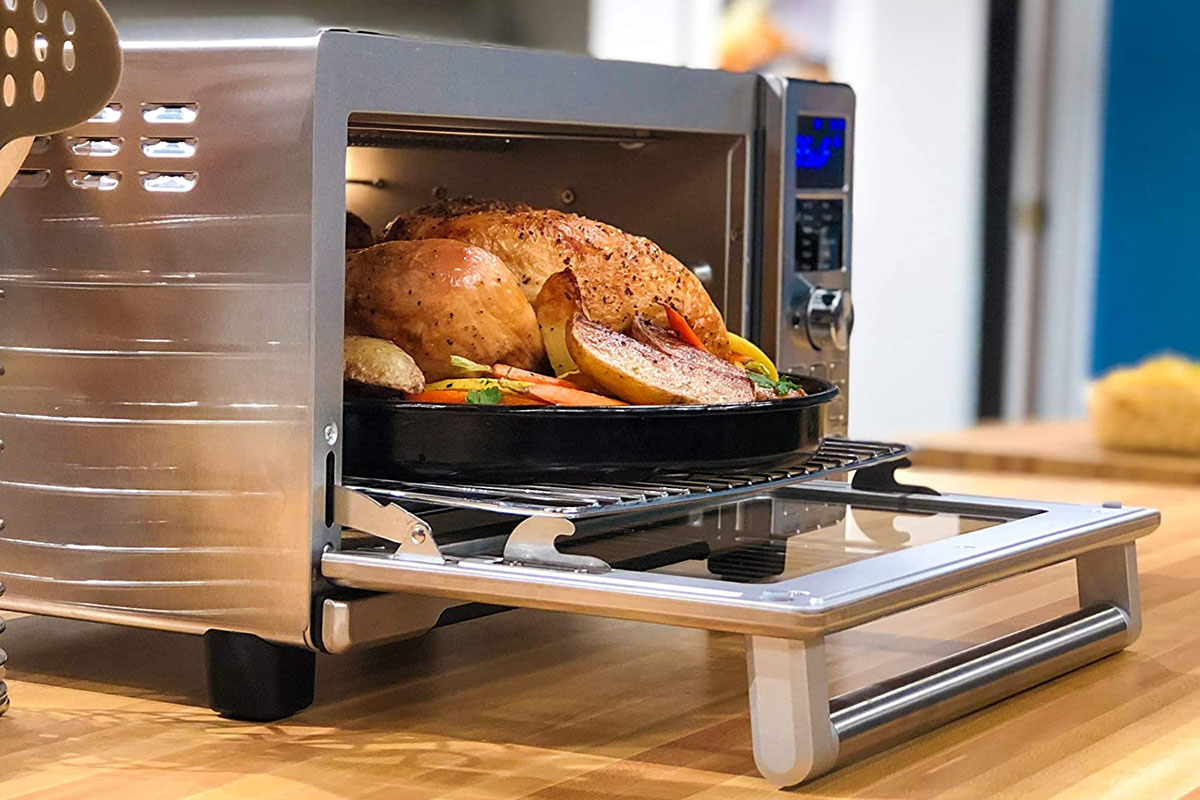 Most people are seeking the perfect appliance that is great at cooking top restaurant quality foods in both an easy and rapid pace. At the current time, the traditional convection oven simply does not excite people anymore. Although the sheer number of options that people have at their disposal can on some level get overwhelming, this article will serve as your navigation tool to find the right NuWave appliance that will fit seamlessly into your everyday life.

Whether it is coffee roasters or convection ovens, NuWave has been revolutionizing the appliance industry since 1997, creating products and ovens that are both affordable and make daily life healthier by utilizing numerous technologies, such as infrared. Known for its Live Well for Less philosophy, the company has found success in selling over 6 million cooktops and has received numerous awards.

This article will discuss the top NuWave ovens on the market, what features make them unique, and why NuWave Ovens are becoming a cooking staple in 2020.

To understand NuWave products, it is important to know how infrared cooking works, as this information unlocks how NuWave ovens and other similar appliances in 2020 gain a competitive advantage. The main advantage that comes with infrared technology is that it gets cooking times for NuWave ovens and other companies’ ovens to be well below the average cooking time of convection ovens.

Infrared technology is one of the best ways of cooking food because rather than taking the time to heat the air surrounding the food (as it would in most convection ovens), it heats the food itself. Not only does this make food taste delicious, but also, the infrared method of cooking food saves energy, as the power that comes from the infrared heat focuses only on the food and does not waste energy on any other random air particles like it would in a convection oven.

The final benefit that comes with infrared technology is easy cleanup. Other convection oven heating methods tend to swirl air around, which is detrimental to the cleanliness and durability of the convection oven. Infrared technology, however, keeps the air still. This means that there isn’t as much to clean on the bottom or on the sides of the inner oven (which in the end leads to longer durability).

Although NuWave Ovens are one of several oven brands that uses infrared technology over traditional convection cooking technologies, it still stands out in numerous ways. Although there are advantages and disadvantages to traditional conventional ovens and ones that utilize infrared technology, when using a NuWave Oven, the type of cooking you get should remain relatively the same. 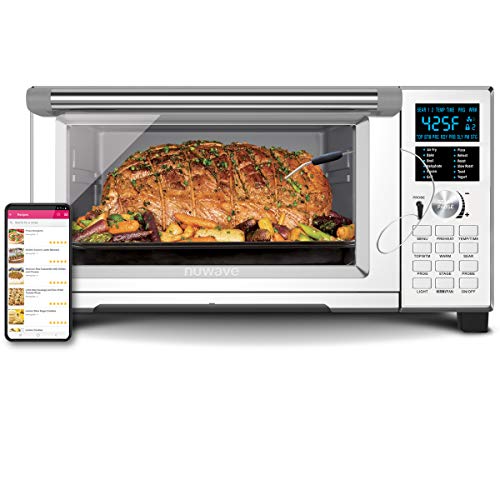 The Nuwave Bravo XL is a convection/infrared oven, air fryer and dehydrator in one convenient device according to Nuwave Bravo XL oven reviews. It is one of the top ovens of 2020. This device is excellent for those that are interested in dehydrating or air frying, but may not be willing to make the commitment to investing in a kitchen appliance they may not regularly use, such as air-fryers or convection ovens. The device is also fairly user friendly; it comes with an integrated thermometer, that uses infrared technology, to cut down on the guesswork while cooking meats of different densities.

The design also is great in saving storage space for those who have a cluttered counter or live in a kitchen with limited space, although this may prove an issue with larger meat products (the dimensions for this product are 20 X 13.5 X 11). Reviews also mention that there have been minor issues with smoke while using the product as an air fryer and difficulty with initially understanding the oven’s interface. Also, in Nuwave Bravo air fryer/toaster oven reviews, people preferred this NuWave Oven to other air-frying products as it tended to have a larger capacity than some of its competitors.

The NuWave Bravo XL Smart Oven reviews also mentioned that this product’s quality and value is either equal to or superior to a convection oven or that only utilizes one cooking method and does not come with any extensions. On average was rated at 4.5 out of 5 stars on Amazon, making this a top-rated product in 2020. In the end, this product is ideal for people looking to save space in their kitchen and still want bold flavors and enjoy cooking meals in a multitude of ways according to Nuwave Bravo Air Fryer Toaster Oven reviews.

The Nuwave Pro Plus Oven is an original product that utilizes various cooking technologies such as infrared to make cooking as easy as a simple press of a button. Unlike a traditional convection oven, this appliance has the ability to bake, broil, roast, barbecue, steam, sear and air-fry in all one convenient device.

The design allows you to cook your food well within one-degree increments between 100 and 350-degrees Fahrenheit. With the dimensions of 15.5 inches wide and 12.75 inches tall the Nuwave Oven Pro Plus is able to cook up to a 10-pound turkey without being too large to clutter your kitchen and relatively simple for putting in storage if the need arises. Also, with the Warm and Delay functions, these NuWave ovens are cooking up to 70% faster while utilizing up to 75% less power than average convection ovens (which may as well be why people call this a pro product).

According to NuWave Pro Plus Oven reviews, people love the quality and durability of this product, although the dome has been known to crack occasionally after years of use. The reviews also mentioned that they enjoyed a much quicker cook time. It is also possible to start cooking right when you take something out of the freezer. You can also purchase the Extender Ring Kit for an additional cost. Customers typically recommended the Extender Ring Kit because the extender ring allows your NuWave oven to increase its capacity by up 50% and includes a multilayer rack so you can cook multiple foods at the same time.

The NuWave Oven Elite is another one of the best ovens. It utilizes three cooking methods to heat its food including conduction, convection, and infrared power. One thing that the NuWave Elite Oven has in common with the Bravo XL Smart Oven is that the heating methods make cooking times up to 70% faster than a conventional or convection oven.

Another unique feature is the Stage Cook function which allows you to insert temperature change instructions based on a particular recipe; the Elite Power Head’s memory bank also stores over 100 of your favorite recipes, which you can pull up at any time.

This product is reviewed on Amazon at 4.5 out of 5 stars, and Nuwave Bravo oven reviews generally appreciated the speedy cook times of meat and veggies. Reviewers also enjoy the limited energy it uses and appreciated that its size made storage easy. A common issue that reviews mentioned, however, was that this oven is not successful while trying to bake items.

How to use NuWave Ovens

​NuWave Ovens should be relatively intuitive to the user and each oven comes with a manual to help first time users, but to set up make sure that appliance is first clean before cooking any food in any ovens. Also, it is important to consider the surface you are cooking food on well before your product comes in the mail. People in various reviews also mention that some products, especially those that utilize infrared technology, come with a tendency to smoke so it is best to consider a more open cooking area, or at least get a window so you won’t over-use your smoke detector and get your neighbors to like you even less in 2020.

​What makes the NuWave ovens stand out in 2020 as some of the best in the United States is that it provides multiple heating functions and techniques in one simple product. Each oven in the 2020 NuWave Oven product line is known for its various functions (whether as an infrared oven, an air fryer, a dehydrator or one of the many other various techniques), its compact size and its ability to conserve energy.

Each oven gets high reviews on Amazon averaging at around 4.5 stars. In 2020, people are now more than ever looking for hybrid devices because people are both tired of the traditional convection ovens and like cooking, air frying, and dehydrating foods without shelling out money for a multitude of specialty devices. So, if your old convection oven or infrared oven is letting you down, it may be time to review your options and make the choice to get what people review as one of the best ovens in 2020 according to Nuwave Oven Pro Plus reviews.