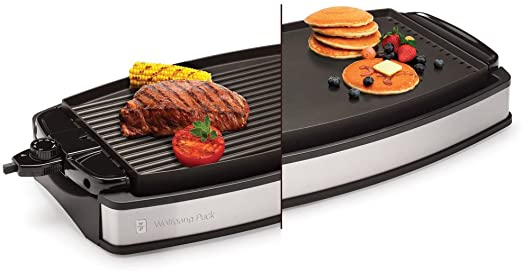 Wolfgang Puck is Hollywood’s most celebrated celebrity chef since 2000. He has achieved great success through his cooking shows. These were aired for many years, and people loved them.

His shows were successful and watched by many, not just because of his cooking skills but also because of his deep passion for it. He climbed to top the culinary field in no time by giving his whole heart to it. And it is because of this success he decided to prepare more new dishes and launch cookware under his own brand including the Wolfgang Puck Griddle which is one of the best griddle and grill on the market today.

When you own his cookware or cook your dish using it, you will realize how it mirrors Wolfgang’s high standards and work ethic.

The Wolfgang Puck Griddle is just like him in terms of performance. It is cookware with the highest demand and is commonly used. The experience of using it is completely different, new, and excellent. One can prepare a lot of dishes at home instead of depending on restaurant food. Also, since it is a grill and a griddle, you get to enjoy both very well.

If you own this cookware, you will know that you own one of the best tools in the culinary world. We will prove this to you through our product review.

The 1.8 kilowatts power rating and its size of 207 sq in enables it to support large amounts of food. This Grill and Griddle combo cookware can let you cook certain food types in larger batches and that too quickly and thoroughly.

Its exact measurements reference its height, width, and length is approximately around 7.8 inches by 24.67 inches by 16.5 inches.

You can cook with ease and no fuss with the temperature adjustment and the non-stick cooking surface. For certain food, you may need optimal temperature, and this option is available in this cookware. Not all food types get heated at the same temperature. Some need to be cooked slowly on low heat while some can be cooked fast by increasing the heat.

Interlock System on the reversible Grill/Griddle

Saving space and making the best use of it is so important today. And anyone who loves to cook would want to own a griddle and a grill. But not all have the space to accommodate both of them. Hence the Wolfgang Puck griddle is the best in this case due to its reversible option.

This single device has both options. You just need to turn the reversible plate to choose either the griddle or the grill. And its interlock system is a savior that helps the top sheet to remain in the right place.

Certain food can get greasy. Luckily this grill and griddle have grease channels that will save your food from being bathed with the grease. Here the extra oil from the dish being cooked is made to flow sideways so that it doesn’t mix with the food and make it greasy.

Most griddles today require them to be taken to the sink as a whole in order to be cleaned. However, the Wolfgang Puck Griddle is different. The only thing you will need to do is take off the upper portion. This will get the grease channels exposed along with the plate.

If this cookware has been in use for less time, then cleaning is easier. You will just need to wipe the surface using a paper towel. It is also easy to repair.

The panels of the Wolfgang Puck Griddle are very safe and it cannot get better than that. The best quality materials have been used to manufacture them. This mirrors Wolfgang Puck’s work ethic and the quality of all his dishes. The coating on top is made from a non-scraping thick material. This is the reason why you will find the griddle to be a bit denser.

Cooking in the Wolfgang Puck Griddle is much safer irrespective of its extra weight. The scrape proof thicker material diminishes the chances of any contamination from carcinogens or any heavy metals in the food.

Strong Heat that is Evenly Distributed

The main attraction and the best feature of this Reversible Grill and Griddle by Wolfgang Puck are that its heat is evenly distributed and is strong. This is its advantage as compared to other griddles available on the market today.

Actually, most griddles other than this one have the notorious habit of certain parts getting hotter than others. And also the temperature increases or decreases suddenly on its own. Due to this, the heat is not evenly distributed throughout the cooking surface. This could affect the quality of the food.

Not so great features of the Wolfgang Puck Griddle

The Wolfgang Puck Griddle eats a lot of power to operate. Its power consumption is so much that at times there could be a power trip. Sometimes such electric overload could also damage some appliances in your home.

When using this cookware, make sure you are not operating any other appliance at the same time whose power consumption is high.

There are other brands on the market that are as good as the Wolfgang Puck Reversible Grill and Griddle. An example is the Oster CKSTGR3007-ECO and the BLACK DECKER GD2011B Grill/Griddle. The Oster is not as expensive compared to the Wolfgang Puck cookware, and it also has good features.

Quality comes with a price. And owning a Wolfgang Puck Reversible Grill and Griddle is definitely a good option. It is the best on the market. If you are someone who loves making burgers, pancakes, meat, vegetables and grilling poultry, then this cookware is the right choice as it lets you try grilling and using a griddle alternatively.

In short, it is total value for money. You can get a variety of dishes cooked on it without worrying about the space occupied.