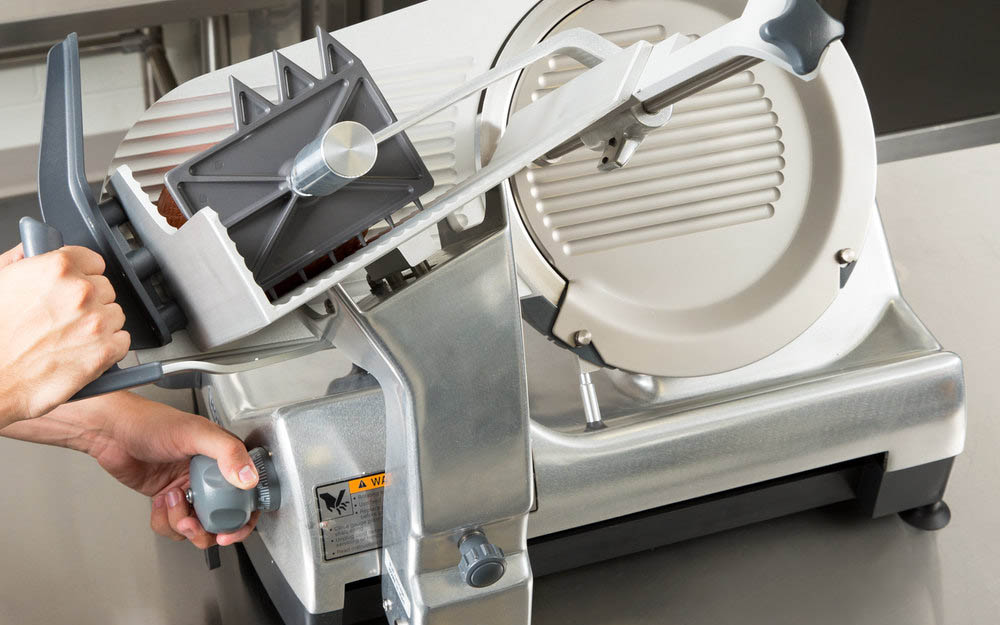 If you have your own business in which it is required that you own a meat slicer, there are few brands that are as reputable as Hobart. With plenty of professional options and high ratings, it is even difficult to find a used Hobart meat slicer.

While these are much more expensive than your traditional meat slicer, especially one that you would use at home, they have many great qualities and features that cannot be beaten by other companies.

In this Hobart meat slicer review, we will discuss five of the best Hobart deli meat slicers that you can find available right now, as well as all the features they have to offer that will take your business to the next level.

The first Hobart meat slicer on our list is considered to be the most popular and one of the best for small restaurants, delis, butcher shops, and grocery stores. You not only can use this automatic slicer to cut meat, but cheese, vegetables, bread, and other food as well.

It features a 13-inch CleanCut knife that you can remove and clean more efficiently. It is made of aluminum, making it a product that will last you two to three times as long as blades made of other materials.

It operates automatically, allowing you and your team to focus on other tasks while it continuously slices pound after pound of food. It also has interlocks that are meant to make the Hobart meat slicer easy to use.

The automatic shutoff will turn the knife off if it has been inactive for at least 30 seconds. You can adjust the thickness of the slices with 1 inch being the thickest you can slice.

The second Hobart professional meat slicer on our list is highly rated and perfect for any deli, butcher shop, or grocery store. You will be able to cut any meats and cheeses that you need. It is made of a durable anodized aluminum that is not only much easier to clean, but it also lasts longer.

This device claims that it is able to cut slices of food as quickly as possible without sacrificing on quality. It operates at a 45-degree angle and has a ½ hp motor that is perfect for cutting cheese as well.

You can change the thickness of the blade using the knob, which will allow you to cut slices of food anywhere between paper-thin and 9/16 inches thick. It also comes with a built-in sharpener that you can use to sharpen the blade in as little as 5 seconds.

This next product from the Hobart HS series has many professional features, including the 45-degree cutting plane, machine grooves, and a much larger product tray that will efficiently hold the food that you are cutting.

The knife of this product is superior due to the fact that it is made of aluminum as opposed to stainless steel or carbon, which claims to last 2 to 3 times as long. It has three stroke lengths and four stroke speeds.

You do not need to use the knife at all during sharpening and cleaning, which also makes this Hobart professional meat slicer a lot easier to use. It has six automatic interlock features and a built-in sharpener as well.

Here is another one of the most popular Hobart meat slicers. It has a 13-inch CleanCut knife that you can remove, making it easier to clean.

Like many of the products made by Hobart, this knife is made of aluminum as opposed to carbon coating or stainless steel, which will allow it to last for up to 2 to 3 times longer.

The design of this meat slicer is also meant to ensure that it is easier to clean because of all the removable accessories and the manual lift lever, which will maximize your performance on the job and allow you to prevent the spread of bacteria.

It has automatic operation, which will also increase your productivity because you will be able to focus on other tasks while the meat slicer operates continuously. You can use it to cut a variety of different meats and cheeses.

The adjustment knob on the side will allow you to customize how thick you want each slice to be, and it can do this up to 1 inch. The built-in sharpener is also added for convenience and you can sharpen the blade in only 5 seconds.

The final product on our list is another Hobart deli meat slicer that has received rave reviews. It has a 13-inch CleanCut knife that cannot be removed, which will minimize the risk of you facing injuries.

This blade is made with a wear-resistant alloy material, which will allow it to last longer than the typical meat slicers.

You will also have no difficulty cleaning this meat slicer thanks to its removable accessories and the manual lift lever. It has a ½ hp motor and a product carriage that has 4 speed, 3 stroke operation and it works automatically.

It can easily handle the task of cutting many different types of food while you and your employees work on other tasks. You have the ability to adjust the thickness at which food is cut up to 1 inch. It also has a built-in sharpener that will allow you to sharpen the blade in only 5 seconds.

If you were looking for a good, professional meat slicer, then you need to turn no further than Hobart’s meat slicers.

While these make quite the investment, Hobart is known for its high-quality devices, including the Hobart 2912, Hobart Slicer 1712, and Hobart Edge 12, which are other great options that are hard to find.

Watch as service at your deli or other business booms thanks to the efficiency of these devices.