For many people, taking a shower is more than just staying clean. A shower is one place where you can actually relax after a long day at work. Thus, many choose to invest in quality bathroom fixtures in order to make their showering experience more relaxing and enjoyable. If you plan to do same, then you should look into getting an LED shower head.

Some LED shower heads are temperature sensitive. They change colors based on the temperature of the water – blue for cold water, green for moderately warm water, and red for very hot water. Other types just randomly change colors. Most LED showers do not require batteries to function. The energy that powers the LEDs is generated as water flows through a small turbine in the shower head.

So why should you invest in LED shower heads? These fixtures do have a couple of advantages that make them worth having. For one thing, they make showers more appealing, which is very useful if you have a young child who doesn’t like to shower. Models that are temperature sensitive protect you from getting burned as a result of getting into the shower at a wrong time.

Let’s look at the best quality LED shower heads available for purchase and what makes them really good. 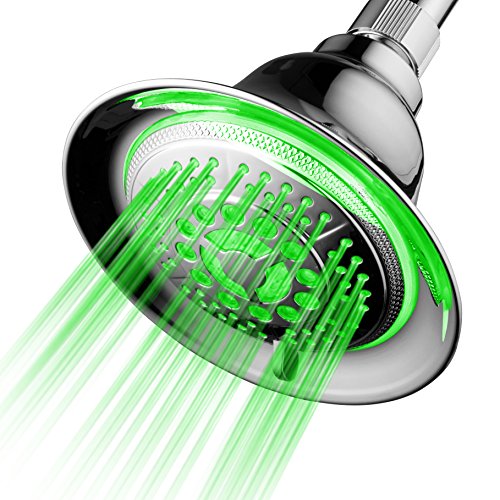 This shower head from DreamSpa is one of the best LED shower heads you can buy. Batteries are not required to power this device as the LED lights are powered by the energy generated from running water. It features an extra-large chrome face with a reflective perimeter rim. The color of the LED lights change according to the water temperature. Available colors are blue, green and red for cool (under 35 C), warm (35-42 C), and hot (43-50 C) water respectively. For very hot (over 50 C) water, flashing red lights provide warning.

This DreamSpa LED shower head is angle-adjustable and comes with 5 possible settings. These include: Pulsating Massage, Hydro-Mist, Power Rain, Economy Rain and Water-Saving Pause. It also comes with a high-power 3 zone dial and rub-clean jets and click-action lever. The shower head is quite durable and the LED lights have a long life of over 100,000 hours.

The DreamSpa All Chrome LED shower head is very easy to install and connects without any hassle to any standard overhead shower arm. It is also very easy to clean. This product comes with a limited one year warranty and you get to enjoy the DreamSpa Gold-Standard Customer Service which allows you to easily return or exchange your product if you’re not completely satisfied with it.

With all these features, this LED shower head from DreamSpa is undoubtedly one of the best out there. It has a 4 out of 5 stars rating on Amazon and a lot of positive reviews. If you’re looking for an ultra modern, elegant, and functional LED shower head, then this shower head is for you. 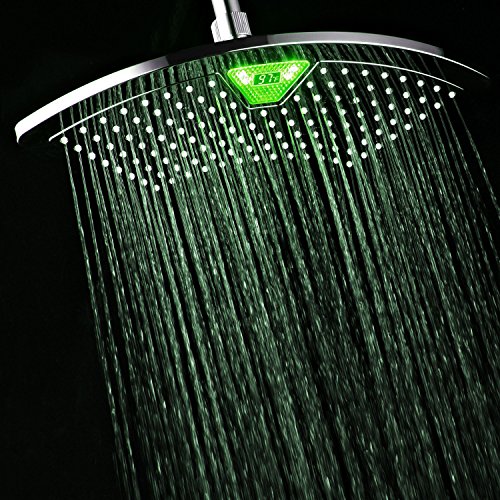 Second on our list is another great shower head from DreamSpa – the DreamSpa AquaFan Rainfall LED Shower Head. This fixture is a fixed mount overhead shower head with an LED/LCD display. Like its counterpart above, it is powered by energy generated from running water and doesn’t require batteries. It also has a built-in water temperature sensor which enables the LED/LCD display to change color depending on the temperature of the water.

It also features 123 rub-clean jets which enables it to provide a high-power drenching rainfall experience. Other great features of this shower head include: elegant curved 12 inch fan design which makes for perfect shoulder-to-shoulder flow coverage, ability to fit any standard shower arm,  easy installation without tools, and angle adjustability. The DreamSpa AquaFan shower head has a premium all-chrome finish. It also comes with a limited 1 year warranty.

If an elegant, high pressure rain LED shower head is what you need, this shower head is definitely a great choice. It can turn an ordinary bathroom into a luxury spa. The DreamSpa AquaFan has a 4 out of 5 stars rating on Amazon from 574 reviews. It is priced competitively and considering the features it offers, it offers you bang for your buck. 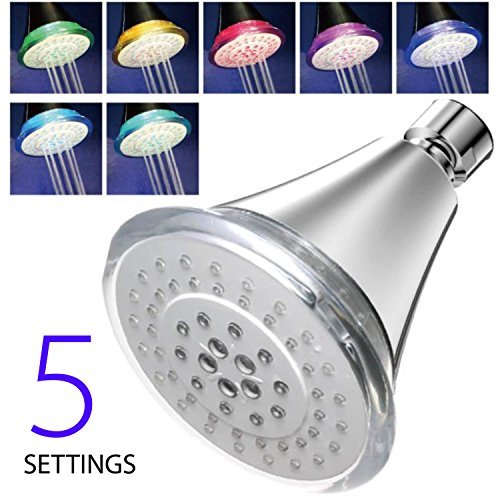 The AquaDance LED shower head isn’t temperature sensitive but changes randomly through a range of 7 colors every few seconds. The LED lights have a long life and will last for over 10 years of heavy daily use. The shower head is easy to connect to any standard overhead shower arm without requiring the use of standard tools or the services of a plumber. The product comes in a premium packaging with a detailed installation manual which is easy-to-follow.

The AquaDance High Pressure LED 5-setting 7-color shower head comes with a hassle free Limited 1 year warranty. You also get excellent customer support from their customer service representatives. The product has a 3.8 out of 5 stars rating on Amazon. It meets the latest US compliance standards and the highest US quality and performance standards.

With all these going for this shower head, it is definitely one of the top LED shower heads out there. Though it doesn’t feature temperature sensitive LEDs, the LED display is still fun and it packs a couple of handy features at a very affordable price. Therefore, if temperature sensitivity isn’t a prime feature for you, then this is your best bet. 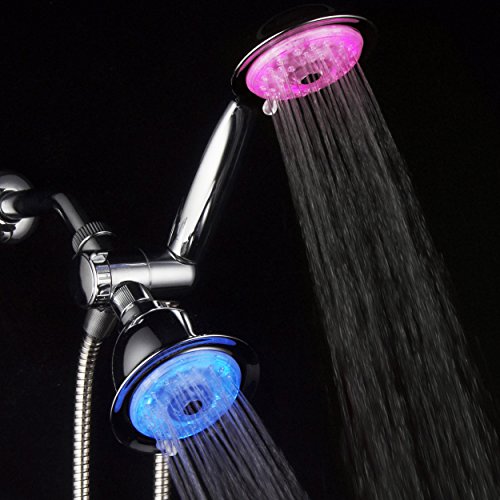 The PowerSpa Luminex 7-color 24-Setting LED shower head combo consists of two LED color changing shower heads. You can use the two shower heads separately or combine them to get 24 different water flow patterns to choose from. One shower head can be removed from the overhead bracket and used as a handheld shower.

Like the other shower heads mentioned above, this Luminex combo doesn’t require batteries to function. The LED lights are powered by running water. They aren’t temperature sensitive, though, but 7 vibrant colors gradually blending into one another and change every few seconds. The two shower heads feature Air Jet LED Turbo Pressure-Boost Nozzle Technology. This technology maximizes water pressure and output performance by injecting oxygen into the water flow through 48 elastic rub-clean nozzles. This also helps prevent clogging.

Both showers have oversized 4 inch faces and are angle-adjustable. They have 4 settings which include Massage, Rain, water saving pause and Rain with Massage. Included with the combo is a 5 ft extra-flexible stainless steel hose which has dual solid brass conical nuts for easy tightening by hand. The fixtures also come with PowerSpa’s patented 3-way diverter and Anti-swivel Lock nut. The shower heads are easy to install without tools and fit any standard shower arm. The product comes with a 1 year Limited Lifetime Warranty.

With a 4.1 out of 5 stars rating on Amazon, the Luminex by PowerSpa shower head combo is certainly a great product. The LEDs are durable and long lasting and it is priced very reasonably for the features it packs. If you’d like the choice between a standard overhead shower and a handheld shower equipped with LEDs, this combo has one of the best handheld LED shower heads out there. 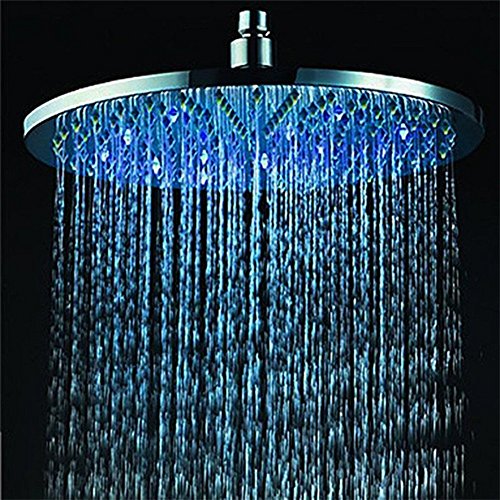 Another great shower head is the ELENKER 7 colors 8 inch Rainfall Shower Head. This fixture is great if you’re on a budget as it is very affordable. While a basic shower head, it still delivers a lot of great stuff for its price. It also doesn’t require batteries to power the LEDs.

On the pros side, this shower head offers good water pressure and is very easy to install. It fits all standard connectors and has 9 LEDs that provide light bright enough to eliminate the need for other lighting fixtures. The shower head has a chrome finish which fits nicely with other bathroom fixtures.

The product, however, doesn’t feature temperature sensitive LEDs. The 9 LEDs randomly change colors between 7 colors every few seconds, thus creating a cool rainbow effect or disco-like environment. The shower head also doesn’t have different settings and the LEDs may not be as durable as the ones on the more expensive shower heads.

In all, the ELENKER 7 colors rainfall shower head offers good value for the price. It has a 3.7 out of 5 stars rating on Amazon. If you need an inexpensive LED shower head, you can’t go wrong with this product.

The LED shower heads reviewed above are best products in the market. They are a great blend of features, durability and affordability. If you would like to make your showering experience more relaxing and fun, then you should definitely consider getting one of these or other LED shower heads.

Before making a decision, it is a good idea to read customer LED shower head reviews and consider your budget and other factors. If temperature sensitivity is an important feature for you, then make sure you get a shower head that features temperature sensitive LEDs. If you’re looking for the very best, then be sure to check out the excellent products above.